Hydroelectric power plants are Costa Rica’s principal source of clean energy. In addition, at a smaller scale, use is made of solar, biomass, geothermal and increasingly wind energy. But not all energy generation in Costa Rica is clean: until recently, it had to switch during dry periods to the use of fossil fueled energy sources. This left the country dependent on the imports of fossil fuels, and that’s what Costa Rica wanted to depart from, especially when nature offers more interesting alternatives. It meant that diversification of its clean energy generation capacity was needed as dry periods will continue to occur and hydroelectric power stations cannot continue during long periods of drought. In the case of Costa Rica it is wind energy which provides an excellent alternative energy source as the wind always blows in major parts of the country.

The wind speed in the sparsely populated province Guanacaste is exceptionally high and stable. Since 2013 25 turbines have been installed, transmission lines have been pulled and related infrastructure has been built. For the trees that had to be felled, a reforestation program started. It provided for replanting of a tenfold of the number of felled trees. At the bottom line, the project emits approximately 76,532 tCO2eq per year less then a non-renewable energy plant would have emitted to produce the same quantity of energy. Now the wind farm supplies enough energy for approximately 100,000 Costa Ricans. Wind farms such as Orosí offer the country a strategic and sustainable alternative and moreover a good diversification of the energy mix. In 2015, 99% of the production of electricity in Costa Rica was sustainable, of which at least 250 days completely run on renewable energy. The country is worldwide viewed as a true leader. Their ambitions will be achieved as the various clean sources of energy can be used now and for many years to come. This is made possible with the right kind of long-term financing. 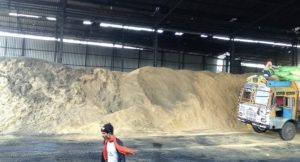 Godawari Power and Ispat Limited (GPIL) has installed a 20 MW biomass based power project at Siltara, Raipur. The purpose of the project activity is to generate electricity using renewable biomass residues i.e. rice husk to reduce GHG (CO2) emissions. As biomass is a CO2 neutral fuel, the power produced by  GPIL from renewable biomass will have zero GHG emissions. Also as it is replacing fossil fuel intensive based power generation from NEWNE grid (now a part of unified Indian grid), it results in reducing emissions from such fossil fuels. In the project activity, biomass is combusted in the boiler for producing high pressure steam to generate 20 MW electricity. The generation of electricity from project activity is the direct combustion of rice husk, and power generation using the Rankine cycle technology. Power generation through this method involves the combustion of rice husk directly in the boiler, with the generation of steam, which is fed to a steam turbine that drives the generator.

Social and Economic wellbeing: This project leads to generation of direct and indirect employment and improving economic condition of the area. The project activity also adds income to the farmers by providing added economic value to the produce  by procuring rice husk from the rice mills. This will help the millers to pay better price to the farmers for their paddy crop.

Since the biomass resources are to be collected and transported to the plant site from the fields, opportunities are being generated for the rural people to collect and transport the biomass residues. The rice husk transportation to site will provide employment opportunities to a number of trucks and other similar vehicles will be making trips to project site throughout the year. This will increase the transport related income and employment. The above benefits due to the project activity ensure that the project would contribute to social and economic wellbeing in the region.

Environmental wellbeing: The project activity utilises biomass potential available for power generation, which otherwise is left un-utilised (left to decay or burnt). Thus it aids in the resource utilisation and avoids pollution due to burning / dumping of biomass in nearby areas. Further, project activity replaces part of power generated in the grid using predominantly fossil fuels such as coal, lignite and gas. Energy from Agricultural by-products is an age old system and an appropriate operation during the transition to ever more efficient forms of renewable energy, at which point the husks may be better utilised in construction or textiles.

Technological wellbeing: Successful implementation of this project would encourage other promoters to adopt similar technology in the  sector.

The project is also enabling a new health clinic in the village of Kachhe AariDongri, providing teachers for local schools, scholarships,  job creation and training centres for girls and women.

Infrastructure has also been enhanced by the creation of roads and a new water pump.

The Sustainable Development Goals (SDGs), launched by the United Nations in 2015, are a vehicle for driving  change. They represent an action plan for the planet and society to thrive by 2030. They address poverty, hunger and climate change, among other issues central to human progress and sustainable development, such as gender equality, clean water and sanitation, and responsible consumption and production. This project has started to fulfil these aims.