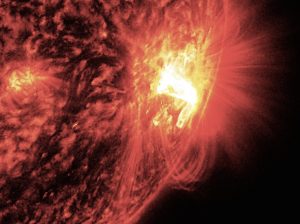 4.6 billion years ago our sun was formed by a solar nebula collapsing under it’s own gravity through a magnetic gravitational storm. Upon reaching a suitable density it reached its equilibrium, where energy generation began. From this point the brightness and surface of stars will gradually increase with age . One could assume the earth would be cooler in ancient times yet for most of this time the earth has been warmer than present times. This is known as the ‘faint sun paradox’. A lack of concentration of reflective particles in the stratosphere or a larger concentration of greenhouse gas molecules in the atmosphere are both possible scenarios that created our ancient climate..

after a heavy bombardment of asteroids. Water vapour from asteroid and comet impacts started to condense in the atmosphere and rain down on the planet as liquid water. Oceans started to form amidst unrelenting volcanic activity where the atmosphere was heavy and toxic, with almost no oxygen but large amounts of carbon dioxide, nitrogen, methane, sulphur and ammonia. Coupled with water vapour, the earth became a crucible for life and a ‘primordial soup,’ ready for the unknown spark that created life, and pure oxygen.

Throughout our planets history the climate has changed through three main climate drivers; 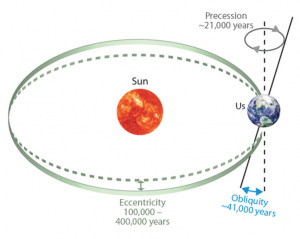 solar cycles, volcanism, and changes in the planet’s orbit and tilt. Ice ages have been triggered by fractional changes in solar heating caused by wobbles in the planets orbit, as a small variation in the planets tilt and a change of exposure to the sun can trigger extreme reactions from the water in the hydrosphere and ice in the Lithiosphere,  this is known as the Milankovich cycle and leads to climate change.

These temperature changes would have been amplified by variables such as the increase of surface ice reflecting more ultraviolet heat in the form of short radiation waves which pass through the atmosphere more efficiently, this is known as the positive Albedo effect. The decreased temperature of the sea is more capable of dissolving CO2, leading to an increased cooling effect. When reversed, a retreat in ice cover will mean less heat is reflected back and more infra-red heat is absorbed into the ocean, a warmer ocean will be able to absorb less CO2, which will in turn catch more infra-red heat in our atmosphere. 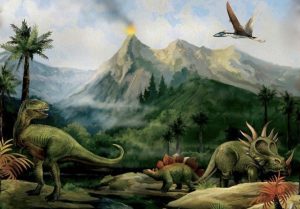 During the Mesozoic Era, “The Age of the dinosaurs’, our warmer planet went through considerable changes. New techniques in measuring wavelengths of plate tectonics and detailed analysis of fossilised waxy leaf remnants taken from sediment cores beneath the Ross ice shelf have shown CO2 levels in our atmosphere to be up to four times higher than current levels. When the Jurassic era saw the break up of the supercontinent Pangea, incredible shifts in plate tectonics led to major increases in volcanic activity, the melting of all polar ice, and sea level rises that created the continents of Gondwana and Laurasia.

The extent of the sea level rise is evident during the Cretaceous ‘chalk forming’ era,  where

generations of well adapted sea life would deposit their skeletal remains to the sea bed where, after many years of compaction, they would create the chalk cliffs of our present day. While rising land masses due to tectonic compression and volcanism will equate for a good margin of the difference between present day sea level and Cretaceous chalk cliffs, there is a clear link between a warm carbon rich atmosphere, the melting of the polar ice caps and a rise in sea level.

Our planet’s biosphere and its relationship with solar cycles are the main climate drivers  and have naturally fluctuated throughout history, however the concurrent rises in CO2 concentrations that have happened as a result of these initial climate shifts then act as a catalyst, accelerating temperature and climate change. Adding anthropogenic carbon dioxide emissions through the burning of fossil fuels will exacerbate a problem that has happened in nature before, jeopardising the climate system and threatening a sixth mass extinction.

1681 – The year that the French physicist Edme Marriot noted that heat from the fire would not pass through glass whereas heat from the sun passed through freely. …..He named these two types of heat luminous and non-luminous heat. Luminous heat would travel from the sun (as ultra violet light in very short wavelengths) then transform into non-luminous heat (infrared heat) upon contact with the surface, this heat has a longer wavelength and will not pass freely through glass. This was a fundamental first step towards understanding the greenhouse effect and how heat from the sun could pass through the atmosphere but be trapped by it once reflected back from the land or sea.

1760 –– Horace Benedict de Saussure had ability to generate an artificial warming of the earth’s surface with simple greenhouse gas experiments using a ‘heliothermometer’, panes of glass covering a thermometer in a darkened box, to provide an early analogue of the atmospheres’ greenhouse effect.

1824 – It was a conceptual leap to recognise that the air itself could trap thermal radiation. Joseph Fourier argued ‘the temperature (of the earth) can be augmented by the position of the atmosphere, because heat in the state of light finds less resistance in penetrating the air, than in repassing into the air when converted to non-luminous heat.’

1836 – Claude Pouillit stated ‘the atmospheric stratum… exercises a greater absorption upon the terrestrial than on the solar rays.’

1861 – John Tyndall investigated the absorption of infra-red waves in different gases, finding that water vapour and hyrdocarbons like methane and carbon dioxide could both block and absorb radiation. He noted that changes in the amount of any of the radioactively active constituents of the atmosphere such as water or CO2 could have produced ‘all the mutations of climate which the research of geologists reveal.’

1890 – Samuel Langby attempted to determine the surface temperature of the moon by measuring infra-red radiation leaving the moon and reaching the earth. The angle of the moon in the sky determined how much water vapour and CO2 the moon’s radiation had to pass through to reach the earth’s surface, resulting in weaker measurements when the moon was low in the sky.

1895 – Svante Arrhenius follows with a climate prediction based on greenhouse gases, suggesting that a 40% increase or decrease in the atmospheric abundance of trace gas CO2 might trigger the glacial advances and retreats. One hundred years later, it would be found that CO2 did indeed vary by this amount between glacial and interglacial periods. The initial climatic shift, through solar cycles, polar shifts, extinction and land use change usually precede the change in CO2, the shift is then enhanced by it.

1938 – G S Callendar solved a set of equations linking greenhouse gases and climate change. He found that a doubling of atmospheric CO2 resulted in an increase of the mean average global temperature of 2 degrees centigrade. ‘As man is now changing the composition of the atmosphere at a rate that must be very exceptional on the geological timescale, it is natural to seek for the probable effects of such a change.’